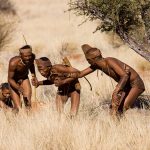 Africa is famously known as the “Mother Continent” attributable to the very fact that it is the oldest inhabited continent on earth. According to paleoanthropologists, humans have lived in Africa for more than 5 million years and thus the cradle of mankind. It is no surprise that a number of the oldest tribes in the world still live in the rich and bountiful continent of Africa. Most of the native African tribes are direct descendants of the earliest Homo sapiens and still have distinctive genetic markers. It is a extremely remarkable that the majority of these old African tribes have still managed to shield their ancient cultural beliefs and their way of life even in the face of modernization. Their survival stories spanning thousands of years are not only fascinating but iconic. Here are some of the oldest tribes that still exist in Africa. The San (Bushmen) They are the oldest inhabitants of Southern Africa and have lived for over 20,000 years. They are the remnants of Africa’s oldest cultural group and share a lot of unique DNA with the original Homo sapiens. According to scientific research, they are the only people in the world with genetic traces as old as 60,000 years which put them firmly at the root of the human tree. They are nomadic in nature and live in temporary shelters, caves or under rocky overhangs. They have great tracking and hunting skills and survive through hunting and gathering. A fun fact about them is that they…