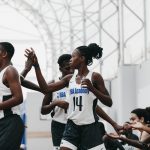 The National Basketball Association (NBA) (www.NBA.com) and SEED Project (www.SEEDProject.org) (Sports for Education and Economic Development), a non-profit organization in Thiès, Senegal that uses basketball as a platform to engage youth in academic, athletic and leadership programs, announced today that two elite female athletes from the NBA Academy Women’s Program (https://on.nba.com/3n9NkpG) have received scholarships to attend SEED Academy in Thiès.

Aminata Tal (Senegal) and Sira Thienou (Mali) – who joined SEED Academy last month – were among top prospects from across the continent to participate in the 2019 NBA Academy Women’s Program camp at NBA Academy Africa (https://on.nba.com/3m3STVe) in Saly and were awarded scholarships in recognition of their leadership on-and-off the court.  At SEED Academy, Tal and Thienou will receive high-level basketball training, tutoring, ESL training, life-skills development and academic and career guidance to help them prepare for the next step in their basketball and educational journeys.

“We are proud to partner with SEED Academy on this initiative, which continues the great momentum we are seeing for young women across the continent who are using the game of basketball to maximize their potential as players and leaders,” said 2003 WNBA Champion and NBA Academy Africa Women’s Program Lead, Astou Ndiaye.  “Aminata and Sira are promising young women who excel on-and-off the court, and we hope this opportunity will help serve as a pathway to their future success.”

Both prospects showcased their tremendous talent, passion for the game of basketball and leadership during the last NBA Academy Africa Women’s camp

“The NBA Academy Women’s Program aims to provide basketball and leadership development opportunities for high-performing young women from across the continent,” said NBA Africa CEO Victor Williams.  “We are excited to see Aminata and Sira take the next step in their basketball journey, and we look forward to continuing our collaboration with SEED Project to expand and enhance our youth basketball development efforts in Africa.”

“We are thrilled to have Aminata and Sira join our group of female student-athletes at SEED Academy in Thiès,” said SEED Project President Joe Lopez.  “Both prospects showcased their tremendous talent, passion for the game of basketball and leadership during the last NBA Academy Africa Women’s camp, and coupled with their drive to perform in school, I have no doubt that they will both add great value to the SEED Academy girls program.”